skip to main | skip to sidebar

I am working on the Ustream schedule for the coming months and would love a bit of feedback as to the types and styles of projects you would like to see. While I have ideas for projects, I would love to know if I am on the right track with what YOU want to work on with me and what sort of scheduling works best....

I am not looking to make any major changes! I just have a few holes to fill in on the schedule and wanted to make sure I was on the right track and not overlooking something you may want to work on before I filled them in.

Please take a minute or two to fill out this little survey!


Thank you all for you input! I want to schedule projects that are what YOU want to do! You all are the best!

Welcome Hoppers! It's the  last day of the Blog Hop with Graphic 45, Want 2 Scrap and Art Glitter. If you missed any days, make sure to go back and check out the awesome projects that have been shown this week. Whoo Hoo, they are AWESOME!
As always, Graphic 45 is sooo generous. Check out the goodies you can win just by leaving a comment!
Be sure to leave a blog comment at each stop along the hop for your chance to win this fantastic Graphic 45, Want2Scrap and Art Glitter prize pack! We're giving away these two amazing prizes packs this week so be sure to hop around and leave blog comments for your chance to win!

Graphic 45 an award-winning scrapbook and paper crafting company­— owned and operated by a mother and her two daughters.  Together we create vintage inspired crafting products that capture the flamboyant style of the 1920's and 30's - with vibrant color, irresistible texture and imaginative design to create products with decades-old appeal that's both fresh and familiar. Let our products inspire your next scrapbook layout, card, album or home decor project.

Want2Scrap™ manufacturers rhinestones lines including the specialty Nestabling™  line along with the newly released Nestaboard™ chipboard line that coordinates perfectly with the Spellbinders™ Nestabilies™ die templates. Want2Scrap™ also manufacturers their own line chipboard albums and accents, acrylic albums, and multi-layered laser designs and other fine scrapbooking products. Want2Scrap™ brings ease of use and flexibility in their product lines by offering products uniquely tailored to its customers’ needs. 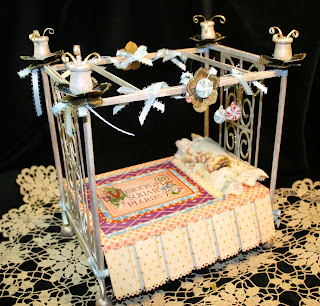 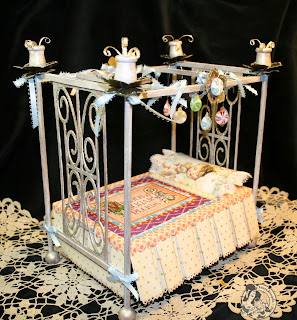 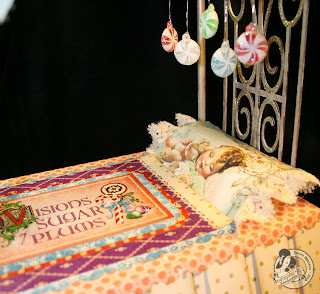 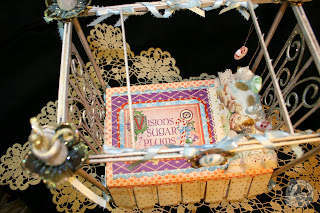 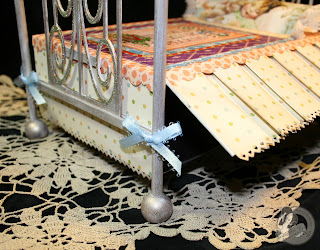 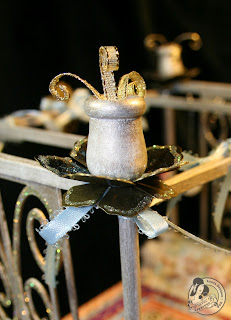 Thanks for stopping by! Don't forget to leave a comment to be entered in the drawing!

....done! and it is up on my website. I will release the pattern links for those who ordered the kits in the next hour or so. 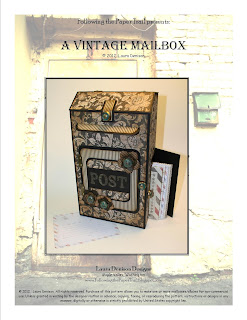 I did not include instructions for the mini or address book in the pattern but will show a simple one on the Ustream show and included the materials to make it in the kits. One more project to finish before I can sleep....See it tomorrow here on my blog with the Graphic 45. Want To Scrap, Art Glitter Blog hop.

Be My Guest Kits

On Wednesday's Ustream show I showed a partial sneak peek of my next Ustream project....Be My Guest. This project will be the perfect way to document a Wedding or Baby Shower, a Birthday or Anniversary party....just about any occasion you share with friends and family! I will have further photos soon, but I wanted to get the kits up today so that I can start shipping them before I leave on vacation next week. The Ustream class will begin on August 10. (I will be on vacation with the family on Aug 2 till 9)

As usual, I will post them in a staggered time frame with 1/3 of the total quantity I have of each style going up at the times below. I will have 3 versions: 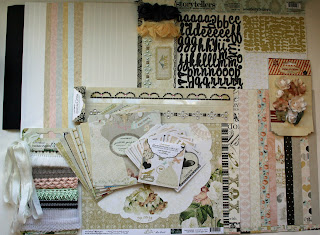 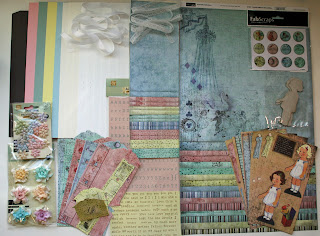 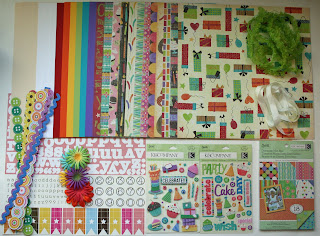 The kits will be available on my website on Thursday, July 26 at:

that it takes sooooo long to get caught up after just a few days away! I am running a few days behind on the Mailbox pattern as I have  been cranking the last of the kits out the door. The pattern should be up on Wednesday.

I will also have the kits available on Thursday for the project that we will do the weekend after I return from vacation....I have named it Be My Guest. It is an album perfect to commemorate a Wedding or Baby Shower or as a Wedding Guest book. It will also work as a Birthday, Anniversary, Graduation or other special occasion. I will have kits to  create a Wedding version, a Baby version or a Birthday version. I will have a sneek peek on my Wednesday Ustream show and will post photo's on my blog sometime tomorrow. As usual the kits will go up in stages and the pattern link will be sent on Friday or Saturday. The pattern only should be available on Saturday.

See you tomorrow on Ustream as we work on embellishments for the Memories on File album pages.

Havin' a blast here at Summer CHA (want to amputate me sore feet but....) Summer CHA is always smaller that the Winter CHA but no less exciting! I have been in a whirlwind of checking out products and ordering for future classes and kits. I am confident you won't be disappointed!!

I have made a few video's and will try to get those posted as soon as I can. I haven't been doing many Youtube videos lately as I have had issues getting logged into my account....remember I am SO not tech-y!

I can show some pictures of the extra projects I did for Graphic 45. My Design Team projects will be up on their blog in the next few weeks. Before you ask..... yes, I will most likely be doing these on Ustream and as patterns and kits..... I know you all sooooo well!

Here is the Gypsy Witch Caravan made from Happy Haunting. I will also be doing this one as a Toymaker Elf Caravan with Nutcracker Sweet Christmas paper..... 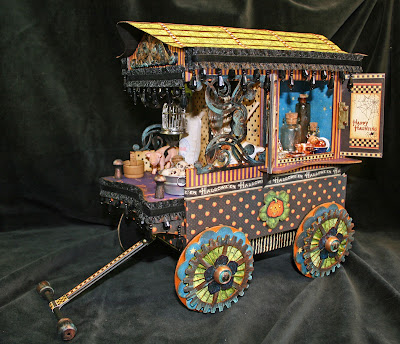 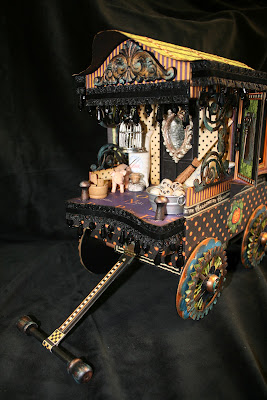 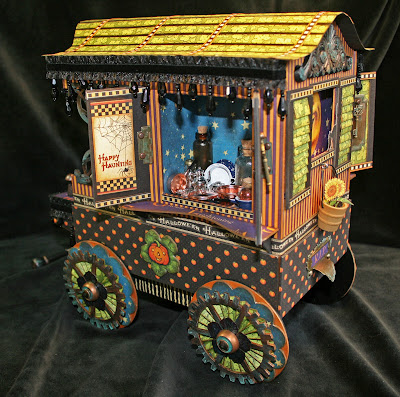 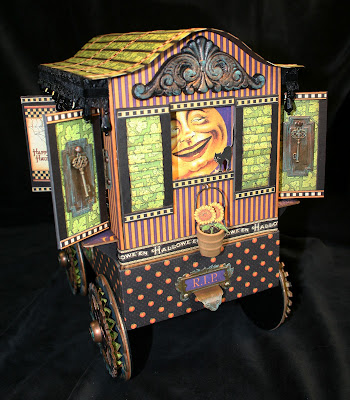 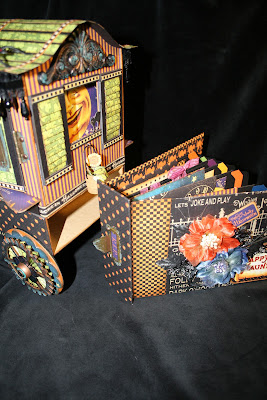 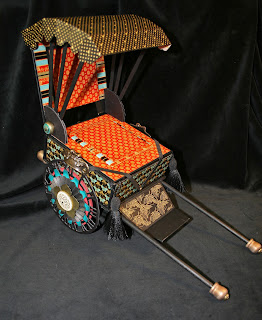 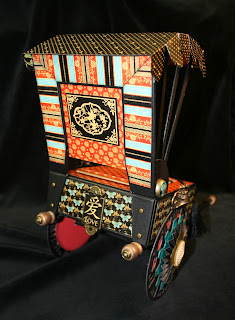 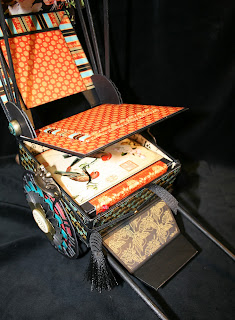 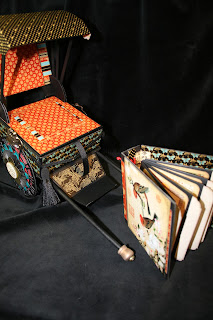 Both of these projects started out as Graphic 45 Altered Boxes and of course have a mini album in them!

I head back home early in the morning. I will post more photo's and videos when I am home on my regular computer.

I had so much fun during last nights Ustream class! We worked on the "girly" version of the Memories on File album. I am DYING to work on it but gotta finish this CHA "stuff" first.

The kits for the girly Fab-U-lous Version (main paper by Simple Stories) went up last night and the second batch went up this morning and sold out quickly. ( .... a certain "Granny" did get one!!!).  I have added another batch, though they won't ship late next week. I am also putting up a Simple Stories Generations Version that will be made with the lacy punches similar to the Fab-U-lous one....just more heritage feeling. I will add a few of the "boyish" Simple Stories AwesoME kits later in the week as well (these won't ship till late next week). I am LOVING the versatility of this project!

The Vintage Mailbox kits will go up tonight and tomorrow. They will ship on July 20th. The pattern won't be available until after I return from CHA. 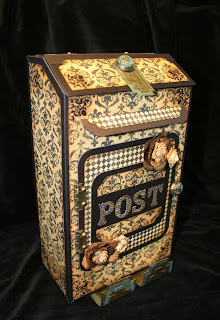 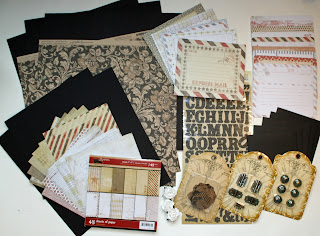 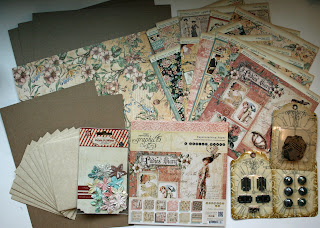 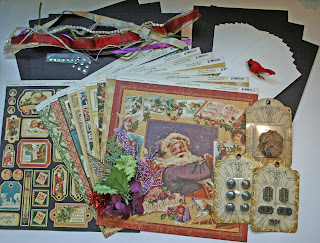 All 3 kits will go up in 3 batches to allow those in other time zones to get in on the kits:

Remember there is no class today or Wednesday as I am prepping for CHA today and in Chicago on Wednesday. Watch Twitter and Facebook for info on whether or not I will do a show from CHA on Tuesday night.

Have a great week!

The Memories on File pattern is up and available on my website. Class will start at 7pm Pacific on Friday. We will make the file folder pages for the Pink Paisley She Art version on Friday and the card stock pages for the Echo Park Note to Self version on Saturday. The following Wednesday, Friday and Saturday will be spent embellishing the albums. 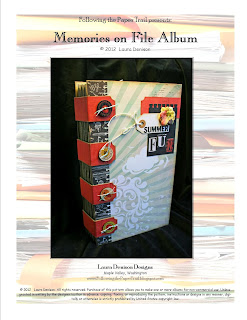 I am so excited with how the Memories on File album has come out. The pattern is done and off to my web gal. Oops!.... it went a bit late though. Got lost in my CHA designing world and didn't send it off in time to put up on Tuesday as planned. It will be up in the morning and I will release it to those who ordered the  kits as soon as it is available. Here are some photo's from inside the album.... 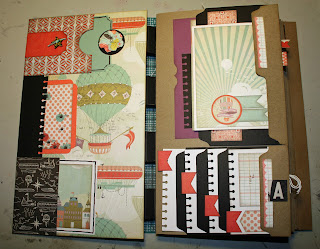 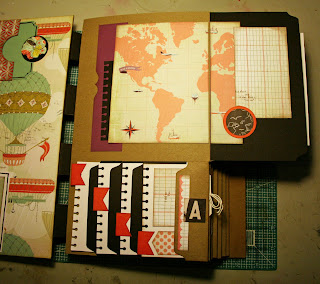 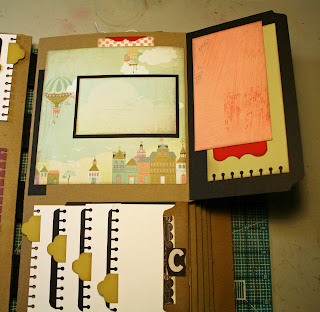 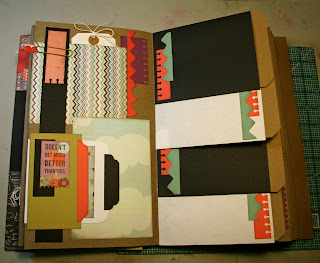 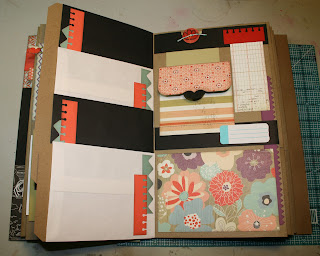 We will be starting this project on Friday at 7pm Pacific. We will be continuing this project for the following 4 classes to really get into the embellishing. Kits are still available on my website. (The one shown above is with What's Up from Basic Grey)

I am like a pig in slop right now working on projects for the Graphic 45 booth at CHA. OMG! Have you been checking out the sneak peaks on their blog??? Trust me the goodies are even better in person! Can't what for you all to get your hands on them as well!

Have a safe and happy 4th of July!!

Laura
Hi! I am a married mother of two living in the beautiful Northwest. I grew up in Anchorage, Alaska. I moved to Seattle after graduate school. My husband is an engineer with Boeing. My son is 17 and in High School and a hockey goalie. My daughter is 14, starting High School this year. Prior to my children being born I worked for 15 years as an Interior Architect in downtown Seattle.

Do not go where the path may lead, go instead where there is no path and leave a trail
- Ralph Waldo Emerson

My kits and patterns are available at my website http.//www.lauradenisondesigns.com

Always try to think outside the box...just remember to save the box and make something with it!!

I allow the sale of up to 10 completed albums of a design when you are the direct seller in a personal situation such as a craft fair or to friends and acquaintances. I ask that you do not sell to a third party for sale (i.e. a shop, boutique, or similar) or via the internet (on sites such as Etsy and Ebay) as it would put you in direct competition with me.
Please contact me for teaching policies.